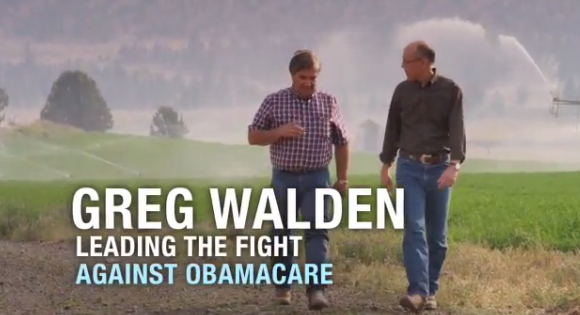 Rep. Greg Walden (Ore.), the top Republican on the House Energy and Commerce Committee, announced Monday he will not run for another term in Congress, making him the latest GOP lawmaker to head for the doors as 2020 approaches.

“I will not seek re-election to the U.S. House of Representatives, nor election to any other office, but instead I will close the public service chapter of my life,” Walden said in a statement.

The announcement adds to the challenges facing House Republicans as they try to win back the majority next year. Walden is the 20th Republican to say he will forgo reelection to the House in 2020, compared with just seven Democrats.

Unlike other ranking members, Walden was eligible for another two-year term as the top Republican on his committee.

Walden, 62, was first elected to the House in 1998 after serving in the Oregon House of Representatives and Oregon Senate. He also previously owned and operated multiple radio stations.

The Oregon Republican easily won his reelection in 2018. The district is expected to stay in GOP hands.

“Based on recent polling, strong fundraising, and the backing of my wife and family, I am confident I could earn the support of 2nd District voters for another term,” Walden said. “I’m also optimistic that a path exists for Republicans to recapture a majority in the House, and that I could return for two more years as chairman of the House Energy and Commerce Committee. But I also know that for me, the time has come to pursue new challenges and opportunities.”

During his tenure in the House, Walden served two terms as chairman of the National Republican Congressional Committee, for the 2014 and 2016 election cycles. Republicans maintained control of the House in both election years.

As chairman of the Energy and Commerce Committee, which has primary jurisdiction over health care issues in the House, Walden played a key role in the GOP's efforts to repeal and replace ObamaCare in 2017.

He led a 27-hour markup of a bill that would repeal and replace ObamaCare, and the measure was passed the GOP-controlled House but went nowhere in the Senate. Congress failed to repeal the 2010 health care law, marking a bitter defeat for Walden and the party.

Further legislative efforts to attack ObamaCare were sidelined after Democrats regained control of the House in the 2018 midterms and Rep. Frank Pallone Jr. (D-N.J.) took the reins of the committee.

Some have speculated Walden could succeed Gordon Smith as head of the National Association of Broadcasters (NAB). The group has denied there are any plans for Smith to step down.

“Greg’s career has been defined by success — as a committed local broadcaster, as a bipartisan political bridge builder, and as a brilliant legislator,” Smith said in a statement. “Congress is a better place because of Greg Walden, and I’m certain he will make a positive difference in whatever path his future may hold.”