Partisanship is the strongest predictor of coronavirus response 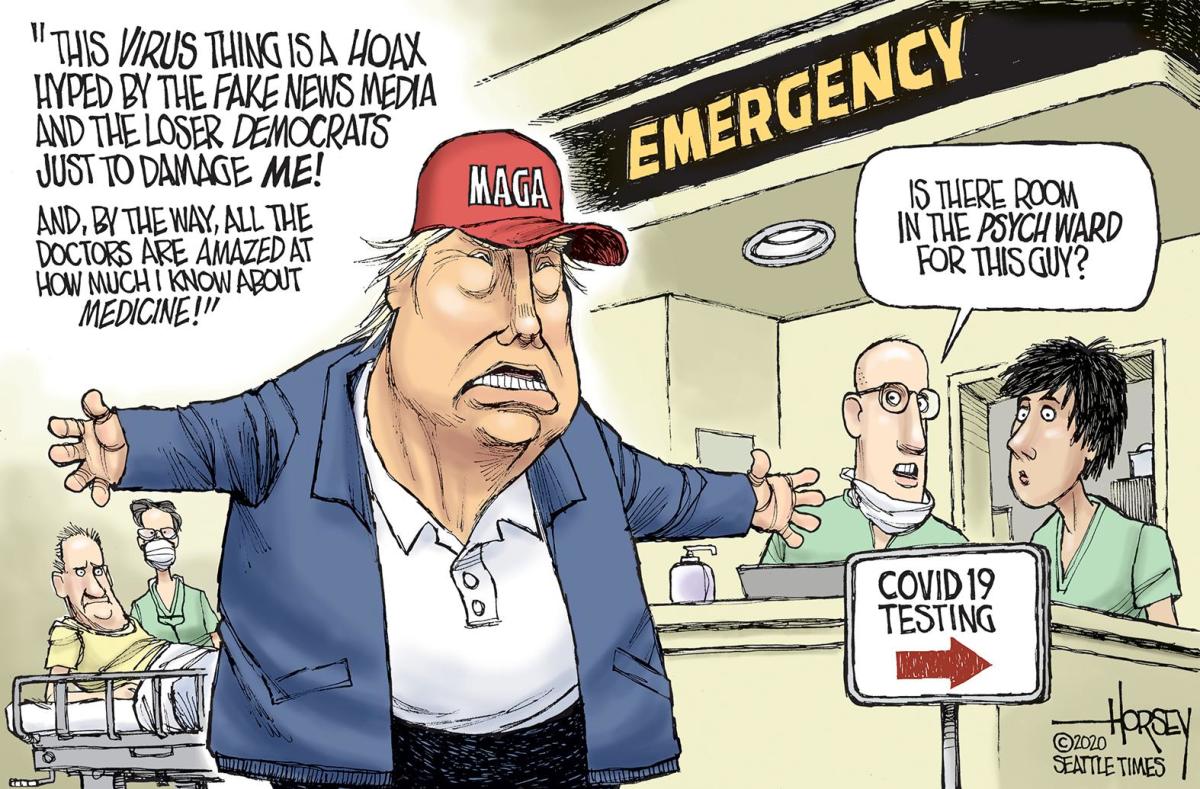 Partisanship is the strongest predictor of coronavirus response

The US is a land divided. Americans have sorted themselves into opposing factions, with different values, sources of authority, and shared understandings. In some ways, there is no longer any meaningful US “public,” but rather two publics that want and believe different things.

The current state of deep polarization in the US is the subject of a great deal of discussion and research right now, including in an excellent new book by my colleague Ezra Klein. One aspect of it that I have highlighted in a number of posts (start here) is what I call America’s epistemic crisis. Epistemology is the branch of philosophy having to do with knowledge and how we come to know things; the crisis is that, as a polity, we have become incapable of learning or knowing the same things, and thus, incapable of acting together in a coherent fashion.

I have been wondering when that epistemic crisis might spiral out into a full-fledged political crisis. I wondered if it might happen around the Mueller investigation, or when Trump sent 5,000 troops to the southern border to stop a phantom migrant invasion, or when Trump was impeached.

‍
Now the Covid-19 crisis has me wondering again. A new bit of research from three leading political scientists shows pretty convincingly that, in the face of the pandemic, Republicans and Democrats are once again hearing different things, forming different understandings, and reacting in different ways.

But this time, the epistemic gap could have devastating public health consequences.

‍
Vox’s Zack Beauchamp, drawing on the work of Tufts University political scientist Brian Schaffner, has written about how partisanship shaped the response to Covid-19 from the very beginning, with Republicans expressing more skepticism and taking fewer precautions, largely following the cues of their political and media leaders (as most people do). Emily Badger and Kevin Quealy at the New York Times recently analyzed data from some similar
polls and surveys, finding a wide but closing partisan gap in views.

‍
While suggestive, research thus far cannot precisely isolate partisanship’s influence from competing explanations like geography, age, or exposure to the virus. Shana Kushner Gadarian, Sara Wallace Goodman, and Thomas Pepinsky — political scientists at Syracuse University, UC Irvine, and Cornell respectively — have just released the results of a survey of 3,000 Americans on a wide range of “health behaviors, attitudes, and opinions about how to respond to the crisis.” (The survey was done March 20-23, a week after the initial declaration of emergency.) Their survey design has allowed them to isolate the effects of different variables on attitudes and behaviors.

Here’s how they summarize the results:

‍
Our results collectively describe a broad political divide in reaction to COVID-19:
Republicans are less likely than Democrats to report responding with CDC-recommended behavior, and are less concerned about the pandemic, yet are more likely to support policies that restrict trade and movement across borders as a response to it. Democrats, by contrast, have responded by changing their personal health behaviors, and supporting policies that socialize the costs of testing and treatment. Partisanship is a more consistent predictor of behaviors, attitudes, and preferences than anything else that we measure. [emphasis added]

‍
Partisanship shapes everything, even direct experience. “What we find is that even when you account for the zip codes people live in, i.e., their actual level of exposure to the disease,” Gadarian told me, “partisanship still matters.” Democrats are more likely than Republicans to wash their hands more often, avoid contact with others, and self-quarantine, more likely to support increased social spending, more likely to worry about getting
themselves and others sick, and more convinced that normal life must be temporarily suspended.

Just about the only virus responses that Republicans support more than Democrats are restrictions on movement (closing borders) and trade tariffs — policies they support regardless of circumstance.

‍
Disagreements about the wisdom of hand-washing and social distancing are not mere differences of political opinion. They are differences about matters of epidemiology. And in disregarding the reports and recommendations of experts, and trusting Trump and right-wing media instead, Republicans are putting not only themselves but everyone at greater risk.

‍
The spread of a virus can only be stopped by concerted collective action. If a large bloc of the public cannot be convinced of the threat or the need for a response, that bloc can prevent collective action all on its own. It can ensure the virus spreads faster and more widely, no matter what the majority does.

And that, more or less, is what is happening. America’s epistemic crisis is having a direct impact on public health.

‍
This is one survey, a snapshot, so it cannot measure how opinion may be changing. “We will do more surveys going forward that track the same respondents,” says Pepinsky, “and these will allow us to test very conclusively if partisan differences dissipate over time.”

‍
In the meantime, surveys up to mid-March analyzed by the New York Times suggest that concern over the virus is rising among Republicans, as do surveys from the Pew Research Center.

‍
One explanation of this shift is that the influence of partisanship, its ability to shelter conservatives from the truth, is waning as the crisis becomes more severe. “While the effects of partisanship are incredibly pronounced,” Schaffner told the Times, “I think they also hit their limits.”

‍
Gadarian says that “once people become anxious about an issue, they act very similarly in their behaviors and attitudes.” In a series of experiments with Bethany Albertson (a political scientist at UT Austin) around the time of the H1N1 scare, they divided students into those who were more and less worried about the virus. “The worried group was more likely to trust in health experts to give them information about H1N1,” she says, “and were slightly
more likely to take a hand sanitizer versus a pen on their way out of the lab.”

‍
So it’s at least possible that, as the Covid-19 crisis grows more severe and people become more anxious about it, Republicans will start listening to Dr. Anthony Fauci and the Centers for Disease Control and Prevention (CDC) — and will continue to do so going forward, mitigating the damage their irresponsible behavior has already done to public health.

‍
At the risk of being predictable, let me offer a more pessimistic prediction.

Partisanship in the US may no longer have any limits

‍
Since Covid-19 came on the scene, Americans getting their news from mainstream sources have heard that:

Meanwhile, Republicans — who, as a landmark 2017 Harvard study of media consumption found, get their information from a small cluster of ideologically extreme sources, now including the president — have heard that:

Republican concern about the virus is increasing, but there’s an alternate explanation: The right-wing base is still listening exclusively to conservative political and media elites; it’s just that those elites have now decided that it is in their best interests to begin acknowledging the threat.

‍
In late March, according to the New York Times, Trump was finally convinced that the data on the coming death toll “could not be bent to his will,” so he begrudgingly extended social distancing measures through April 30. It won’t be long before conservative media is echoing his claim that 100,000 or more US deaths from Covid-19 would be an indicator of his success.

‍
While conservative elites may have changed their tune about the existence and severity of the crisis, they have not ceased searching for a scapegoat against which to turn their credulous followers. Trump and his allies are still blaming the media, blaming China, and blaming Democratic governors. Trump has also floated the idea that New York is spreading the virus and should be isolated.

The details of the dangerous myths being fed to the conservative base are changing, but they are still being fed dangerous myths. They are still disregarding experts and following shifting narratives built around venerating Trump and shielding him from accountability. As they come to believe those myths and act on them, the anti-social nature of their behavior will not be quite so self-evident as their failure to wash their hands, but it will still be anti-social.

Progressive reformers tend to cling to the myth that a sufficiently dramatic shock or disaster will have the effect of dispelling misinformation and propaganda, like a mighty wind blowing dust from all the lenses. I hear it around climate change all the time, the notion that people will wake up to the threat when there is a bad enough storm, or a series of storms.

‍
And I’ve heard it about the epistemic crisis again and again. Surely the Iraq War is a big enough disaster to puncture the bubble. Surely the botched response to Katrina. Surely the Great Recession. Surely 10 fruitless investigations of Benghazi. Surely Trump’s impeachment. It never happens.

People forget, but the response to H1N1 flu in 2009 was also split along partisan lines — it was visible in vaccination rates. So was the response to Ebola in 2014. Conservative political and media elites were spreading misinformation and conspiracy theories then, too. It’s just that they weren’t in charge, so their ability to amplify their message and do real harm to public health was limited.

‍
Now they are running things, spreading misinformation and conspiracy theories live on primetime TV every night, leading the US into a historic catastrophe in which more Americans have already died than died on 9/11. And the death toll seems fated to rise for the foreseeable future.

‍
The epistemic crisis has been underway for many years now. It was inevitable that it would spill over into a full-fledged political and health crisis. If it were not clear before, it has become unmistakably clear now: Right-wing misinformation is a direct and immediate threat to the American public.