What state ranks highest on the amount corporations donate to political candidates, per resident? It’s Oregon !! 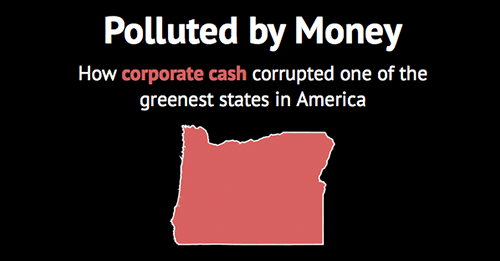 Outraged? Join a forum in your area to talk more about campaign finance reform. Details below.

We are #1 for corporations influencing who represents us. Timber companies, in particular, spend big money, giving more to Oregon lawmakers than to lawmakers in any other state. And these big corporations are not using their influence to look out for our best interest.

Big Timber and Big Oil use their influence to get rollbacks on state environmental protections, including our air and water protections. Just this year, they used their influence to kill the Clean Energy Jobs bill, which means Oregon is falling behind on climate even as Oregonians overwhelmingly want climate action now.

Why do our laws fall short of what Oregonians want?

It’s not a coincidence that Oregon is one of just five states without campaign contribution limits, and we have some of the weakest campaign finance laws in the country. If we want a legislative system that prioritizes our right to clean air and water, and a livable future for our kids over profit, then we need campaign finance reform.

It may be an uphill fight, but it’s too important to give up. And it’s critical we work toward evening the playing field. That’s why during the 2019 Legislative Session, OLCV supported three campaign finance reform bills that passed. It’s a good, if small, step in the right direction. I hope you will join in a discussion of what’s next.

September 4th to the 23rd, State Representative Dan Rayfield is holding a series of campaign finance forums around the state. Each forum will include a panel of election reform experts, a presentation explaining the reform bills passed, and a community discussion to hear what Oregonians think next steps should be. What kind of campaign contribution limits would you like to see?

Here’s a sneak preview of the three bills that passed this session and will be discussed:

Oregon’s politicians should stand up for the people, not corporate interests. We hope you can make it to one of these campaign finance forums, learn a bit more, and make your voice heard!

P.S. This email contains facts from The Oregonian’s investigative series, “Polluted By Money,” by Rob Davis. If you haven’t yet, give it a read here.